Presentation at the launch of the report: The European Investment Bank in the South. In whose interest? by Jaroslava Colajacomo, published by CRBM, CEE Bankwatch Network, Friends of the Earth International and WEED. 8 February 2006, Brussels. 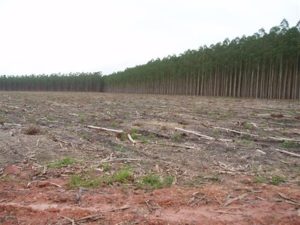 Veracel is a US$1.25 billion pulp mill project in Brazil, built with financing from the European Investment Bank. The company is a joint venture between Stora Enso (Sweden-Finland) and Aracruz (Brazil) in the southern part of the State of Bahia. The Veracel project provides a good example of just how much cheap public financing companies can get when they decide to build a pulp mill. Veracel received two loans from the European Investment Bank (US$30 million for plantation establishment, US$80 million for pulp mill construction) as well as a loan from the Nordic Investment Bank (US$70 million). Meanwhile the Brazilian Development Bank (BNDES) handed over a loan for US$500 million.

Every seven years Veracel’s plantations are clearcut. Nothing is left apart from a few blades of grass and some twigs.

When the EIB agreed to the loan, the Bank said that the project is in an area “in large need of financial resources and investments”. The EIB predicted that the pulp mill project would create employment and generate significant export revenues. Well, it creates revenue for the companies involved – the Veracel project led to a series of lucrative contracts for European and Nordic companies. But Veracel’s pulp mill provides jobs for only 400 people. In total the company employs 2,000 people.

Last year I visited Eunápolis, where Veracel built its pulp mill. A local government official told me that several thousand people had moved into the area to work on building Veracel’s pulp mill. When construction finished about five thousand people were left unemployed. Many of them remained in the area. But Veracel contributes little to the state in taxes. Under a 1996 Brazilian law, exports are exempt from state sales tax. Veracel exports almost all of its pulp.

Together with colleagues from the Brazilian NGOs CEPEDES and FASE, I visited a community called Maneco. Villagers living there told us that many people had moved away since the plantations had arrived. “There are no jobs here now and no money from the eucalyptus,” a villager said. The village shop owner told us that business was down by about 80 per cent. The river near the village is drying up and is increasingly polluted by agrochemicals from the plantations. Plantation workers clean their tractors in the river which further pollutes the water. Fish and cattle have died as a result.

The EIB states that its loan to Veracel helps to protect the environment and Veracel claims that it gives “no incentive for others to burn or deplete their forests”. Yet in December 2003, officials from the federal environmental bureau, IBAMA, pointed out that a large area of forest had been logged to make way for eucalyptus plantations for Veracel, under the company’s farmer contract planting scheme. In December 2005, IBAMA fined Veracel US$136,000 for preventing “regeneration of the Atlantic Rainforest on 1,200 hectares”. The company denies the allegation.

The villagers from Maneco took us to see their cemetery. It is now completely surrounded by eucalyptus plantations. We had to drive between the rows of trees to get there. Villagers told us of people getting lost in the plantations on their way to a funeral. The cemetery is smaller than it used to be, since Veracel has planted its trees on what used to be the cemetery.

The EIB doesn’t even have safeguards, which might, at least in theory, prevent it from financing environmentally and socially damaging projects. An EIB press release about Veracel tells us that the Bank “carries out a detailed appraisal of the economic, financial, technical, and environmental aspects of each project it is considering for financing.” But none of these studies are available to the public. At a meeting with representatives from the EIB in Brussels in October 2003, Marcelo Calazans from FASE asked for copies of the documents that the EIB produced during its evaluation of the Veracel project. Bank staff replied that none of EIB’s documents about Veracel were available to the public. They also declined to release the date when Bank’s Board would meet to discuss the Veracel loan. The EIB is a public institution, spending taxpayers’ money. Such secrecy is simply unacceptable.

This new report on the EIB being launched today, includes a series of recommendations for the EIB, including one that the EIB should not in the future finance large scale industrial tree plantations. This is not an original recommendation however. It echoes a report produced in 2003 by the Centre for International Forestry Research, Fast-Wood Forestry: Myths and Realities. CIFOR is an international research institution “committed to conserving forests and improving the livelihoods of people in the tropics”. (In 2002, it received funding from Aracruz.) The authors of CIFOR’s report, Christian Cossalter and Charlie Pye-Smith, recommended (among other things) that subsidies to commercial plantations should be phased out, “the sooner . . . the better”. They added that “Subsidies create economic distortions and make plantations viable in situations where other land uses might make better economic and environmental sense.” The EIB should take note.

The death of the forest: a report on Wuzhishan’s and green rich’s tree plantation activities in Cambodia (December 2005)